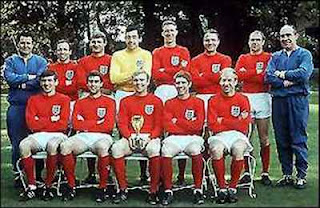 Ok, let’s have a quick look at football, or, as Pelé described it in his autobiography, ‘The Beautiful Game’. To kick off, remember that no self-respecting British fan will call the game soccer. Soccer’s used over the pond in America to avoid confusion with American Football one of the many games played with an oval shaped ball.

In Britain, call it football or even just ‘footie’:

“Fancy a game of footie on Saturday?”

Or what about ‘a kick-around’:

“We had a kick-around in the park.”

Now you can kick a ball around (or about) but you can also kick ideas around:

“They called the meeting just to kick a few ideas around. They were trying to come up with a new slogan for their marketing campaign.”

Then there are hundreds of other sentences you can make using ‘kick’ as a verb or a noun. As with most verbs there are physical meanings:

“He kicked the ball up and over the fence.”

“He kicked the ball off the pitch.”

“She kicked the ball out of the garden.”

“She kicked the ball down the hill.”

“He kicked the ball at me.”

Etc. etc. etc..
Then there are the more idiomatic uses:

“I don’t fancy going out tonight. I’d rather just kick back at home and watch a film or something.” i.e. to relax

“After her fifth beer, the alcohol began to kick in” i.e. to take effect

“I was kicked out of the club for smoking a joint.” i.e. to expel/dismiss

“I’ve been trying for years to kick smoking.” i.e. to quit

“When I kick the bucket, I want my body sending into space.” i.e. to die

“He’s a cruel, horrible man. He gets a kick from watching other people suffer.” i.e. to enjoy

“Everybody was at the party. There was loads of food, booze and good music. It was kicking.” i.e. brilliant
Well, hey, there are just a few for you to work on. A good dictionary will show you many more. So, wow! Let’s get back to football.

Now, just before the start of last year’s World Cup, I saw a newspaper article about just how many registered football clubs different countries have and England (not Britain) had the second highest number of clubs and players in the World. But who had the highest? Well it wasn’t anyone in Europe or the Americas. It is in fact China. I wish I could bring you the figures – I’ve lost them – but, with a population of well over a billion, it shouldn’t come as any surprise.

Still, this just goes to show how important football in Britain is. Bill Shankly (1913-1981), Scottish football and manager of Liverpool expressed this:

“Some people think football is a matter of life and death. I assure you, it's much more serious than that.”
Look at the attendances at some of the biggest clubs in England. Manchester United (The Red Devils) topped the table with an average attendance at their stadium, Old Trafford, of almost 69,000 in 2006. Newcastle (The Magpies), a massive club who regularly underperform, had an average of 52,000 at their ground, St. James’ Park, in 2006 and even non-league teams at least 100 places below the Premier Division will get a home-crowd of a thousand or more. Add to this the millions who stay at home or go to the pub to watch games on TV and you begin to understand why Monday morning newspapers may have 20 pages dedicated to football alone!

Of course, some people do use football as an excuse for violence. Football hooligans (we prefer to use the term hooligan – Czechs often call them rowdies) can still be a problem especially when the national teams play but on the whole hooliganism is not the problem it was in the 1970s and 80s.

Generally, football can be a good way of making friends in Britain. Find a team that you like (please don’t make it Chelsea as they have enough help from their owner Roman Abramovich and the millions of pounds that he has invested into the club), get to know a bit about your club, and then start to chat with Brits you meet. I’m sure half the lads you meet, and quite a few of the ladies, will have something to say – and I don’t think you’ll get punched in the face. You only have to support your team through thick and thin (i.e. during the good times and the bad) and people will respect you for that.

David Bowie’s first big hit, Space Oddity, has the line, “And the papers want to know whose dress you wear.” This was the question football fans used to ask to find out what team somebody supports. The question is not used so often these days but I did hear it sometime ago when I was in the pub with my uncle and his older friends. Commonly used in football instead of dress is the word ‘kit’.

Kit can mean all the equipment you need to do something:

‘a first-aid kit’
‘a survival kit’
‘a shaving kit’
And therefore, a football kit includes a player’s boots, socks, shorts and shirt. Players also wear shin pads to protect their legs if they get kicked. So a coach could tell his players to get dressed or ready for the game by saying:

“Ok lads, get kitted out. The game kicks off in 30 minutes.”
You could also say:

“She came to the party kitted out in her best clothes.”
You might hear somebody say something like:

Otherwise you can call the socks, shorts and shirts that a footballer wears ‘a strip’. I won’t go into the word strip just now. We can save that for something more interesting than football.