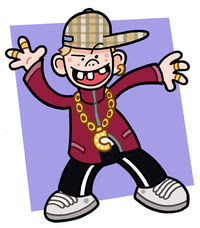 Chav is a negative slang term in England which appeared in dictionaries in 2005 . The term “chav” refers to a subcultural stereotype who wear gold jewellery and designer clothing in the Burberry pattern (most famously a now-discontinued baseball cap) and from a variety of other casual and sportswear brands. Tracksuits, hoodies, jogging bottoms (known as sweatpants to some) and baseball caps are particularly associated with this stereotype. Musically, chavs tend to like rap, Garage, and R&B. Response to the term has ranged from amusement to criticism that it is a new version of classism. The term has also been associated with delinquency, the "ASBO Generation", and "Yob culture".

The accepted origin of the word "chav" is that it derives from the Romani word "chavi", meaning a child. Related words, from the same source, include "charva" (used in northern England in a similar sense) and perhaps the obsolescent "young shaver" (meaning a boy). In modern Spanish "chaval" means "lad". There are a large number of synonyms and regional variations of "chav", including "scally", "townie", "ned", kev and "Mallie".

Many folk etymologies have sprung up around the word. These include backronyms such as "Council Housed And Violent" and "Council House Associated Vermin". It has also been suggested that pupils at Cheltenham Ladies College and Cheltenham College used the word to describe the younger men of the town ("Cheltenham Average").

From its origins as a slang term, use of the word spread so quickly that by 2004 it had become a hugely popular word in national newspapers and a common expression in the UK. Susie Dent's Larpers and Shroomers: The Language Report, published by the Oxford University Press, designated it as the "word of the year" in 2004. A survey in 2005 found that in December 2004 alone 114 British newspaper articles used the word. The popularity of the word has led to the creation of sites devoted to cataloguing and mocking the "chav" lifestyle.
Posted by Matt Ford at 19:20