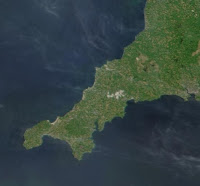 I would like to ask you for your opinion concerning people in Cornwall.

To be honest I don't have a strong opinion about Cornish people, and I have had no friends who are from Cornwall.

However I have very happy memories of going there on holiday, almost every year, when I was younger. The people are friendly and I think, because of the warmer climate, they are also a more positive, happier and easy-going people.

I have also read that around one third of Cornish people consider themselves to be Cornish (not English). Originally Cornwall was part of the kingdom of Dumnonia that may well predate the Roman occupation and even Cornwall was portrayed o­n many maps, as separate from England right up until the mid 16th century. In addition to this, during the 20th Century the language of Cornish (related to other Celtic languages) was successfully revived and is now a protected language under the EU. Therefore there is definitely some nationalistic forces in Cornwall.

And one final point: I love Cornish Pasties!

Hope this answers you question.