Primary school
In England, Scotland and Wales, children under the age of five can either choose to go to the parent and toddler group where a parent must be there to supervise her child or a nursery school, 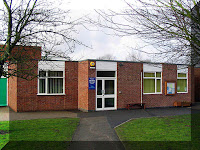 where a child can enter at the age of three or four and a fee is normally charged. At the age of five, which is the official age to go to school in England and Scotland, a child attends a local school where the school must accept the child without any conditions. Children may also be sent to a state or coeducational school, or a high reputation or religious school. The school time usually runs between 0900 hours and 1500 hours. The students go to school from Monday to Friday for three terms and have twelve weeks of holiday; mainly at Easter, Christmas and in the summer. Class sizes vary; there are usually between twenty five and thirty pupils, thirty five being the maximum. For a practical class, the class sizes are smaller due to safety reasons.

A single teacher teaches the pupils all subjects, which are art, analysis, drama, English, geography, history, mathematics, Scottish Gaelic for some pupils in Scotland, and science. In some Primary Schools, an introduction to a Modern Foreign Language such as French is introduced, where pupils will learn basic language such as saying what day it is, and what pets they have, etc. The teachers are also responsible for teaching them independent thought, group work and develop their social conscience, meaning to teach them how to behave well in society. There are tests known as SATs and are taken at the end of Key Stage 1 [Infants] and Key Stage Two [Juniors]. However, these are not examinations. These are for the governmental statistics. Nevertheless, the schools receive criticisms if the pupils do not do well in the tests.

Secondary school
Students in Wales, England and Scotland, attend their secondary education at the age of eleven. They go either to a coeducational comprehensive school, a grammar school or public school (which in England is a privately-operated school). Comprehensive schools, by law, cannot 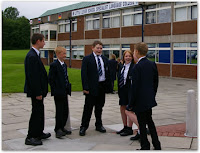 discriminate on ability of students, though can operate as religious institutions- only admitting pupils of the particular religious denomination. Grammar Schools are fairly rare, remaining widespread in only 5 counties. Every student has a Form Tutor who is responsible for all his or her registered children, and a Guidance teacher who he or she is responsible to the programme and students' development. The class may run between 0845 hours and 1630 hours, though schools set their own hours. The students go to school from Monday to Friday for three terms and have thirteen weeks of holiday which are Easter, Christmas and the summer, with a week breaking up each of the three terms (Half Term).

In some schools, especially for subjects such as Mathematics and Modern Languages, schools stream pupils on ability, otherwise pupils are taught with the other members of their form; all students study the same subjects and they are English, modern Foreign Languages, usually French, Spanish or German, geography, history, social education, religion, cooking, music, and physical education. In Grammar and Public schools, it is more common for traditional subjects- such as Greek and Latin, to be additionally taught. All students between the age of fourteen and sixteen in England sit the General Certificate of Secondary Education examinations, whereas the students in Scotland sit the Standard Grade at the fourth year of their schooling. The Standard Grade is broadly equivalent to that of the English General Certificate of Secondary Education. Students who do the General Certificate of Secondary Education sit five examinations at the minimum and may sit up to twelve examinations, sometimes even more for Gifted and Talented students. Students sitting Standard Grade examinations sit eight. Thereafter, students may choose to leave school or to continue school.

Unlike the systems on Continental Europe, a student in the United Kingdom automatically progresses to the next level of year and do not repeat the year even if the student fails his or her examinations. Increasingly, gifted and talented students are entered for examinations early, e.g. Mathematics is sometimes taken a year or a few terms early and then another GCSE such as Statistics or an FSMQ is taken in the remaining time of the year. Additionally, in some schools, students who fluently speak a GCSE Course Language [French, Spanish, German, Italian, Russian, Urdu etc.] are allowed to take this GCSE early, possibly in Key Stage 3 to enable them to take an additional GCSE when entering Key Stage Four.
Posted by Matt Ford at 22:51

Very interesting and thank you for teaching me about your culture I really love England and I want to learn more.
Fabiana from Argentina