Just Thought I’d 'Chip In'
Chips, don’t you love them? Actually, I guess it depends on what kind of chips we are talking about. Some chips you can eat, some you can’t eat and some you would definitely not want to eat.

Let’s have a look at the inedible variety of chip. Imagine that you go to a friend’s house for dinner. Unfortunately, you drop your glass on the table. Now the glass doesn’t break but the table does. Well, the table breaks just a little. A little piece of wood comes off it. So you say:
"Whoops! Sorry! I’ve just chipped the table!"
And the little piece of wood that came of the table - is a chip! And just to confuse you a little bit more, the table now has a chip in it!! So, if you go into a bar and you are given a glass that is just a little broken at the top, then you go back to the barman and say:

In Britain, you don’t need to specify ‘potato chips’. Just go to a Fish and Chip Shop and ask for:

"A portion of chips, please."
And we will know exactly what you want. You won’t be given French Fries, which are the very thin pieces of potato served in places such as McDonald’s. The British chip is much fatter. If you said to a Brit that you like 'potato chips' he will probably understand that you mean ‘crisps’ because that is what many Americans say.

Here are two pictures that should help you to understand: 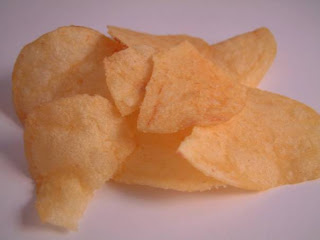 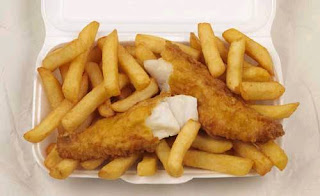 Now back to the Fish and Chip Shop. So you go in and order your portion (or bag) of chips and you might be surprised just how many chips they give you. It’s not unusual that two or even three people may share one bag because you get so many. Also, chips don’t usually cost much, which makes then the perfect snack, too. Therefore, the Brits use this nice little phrase:

"I bought a new TV. It was on sale for half-price so it only cost eighty pounds.
It was as cheap as chips."
But the many other phrases that use the word ‘chip’ are not associated with the food. Watch out if somebody has a chip on their shoulder. This means that they are basically angry about something and they have probably been, and will probably be, angry about it for a long time:

Fernando has a chip on his shoulder because he thinks he’s small. He keeps trying to pick fights with people who are bigger than him.

Ok? Well, here’s another idiom then. If somebody is a chip off the old block then they are very, very similar to one of their parents, maybe not in the way they look but definitely in the way they act:

“Angela’s really such a nice, kind person.” “Yeh, I know. She’s just a chip off the old block. Her mum’s exactly the same.”

Here are some more chips: 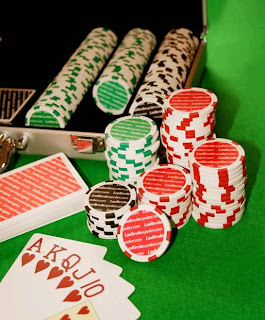 Poker chips are used instead of money in casinos. If you have any poker chips left when you have finished gambling then you go to the casino bank and cash in your chips. Therefore, you get some money back. But, if you said that someone cashed in their chips and you are not talking about gambling then you might be talking about business, or even that the person died!
He cashed in his chips. He was only fifty-five years old but he was ill for a long time.
She didn’t think the business was going well so she cashed in her chips and left the company. (i.e. she took all the money she had in the business and finished working there)
Another important phrase is: when the chips are down. It means that the poker chips are on the table and can be won or lost – or that a situation is very important:

When the chips are down you can always rely on Jana to help you.
(i.e. If the situation is important then Jana will always help)
Well, does it get more exciting than this? It’s the ninetieth minute! The World Cup Finals! England have a penalty! Will they score? The chips are down..
By the way, my Italian friend tells me that poker chips are called ‘fiche’ and pronounced as in ‘fish’ in English. Funny old world, eh?

An important expression in English is to chip in. This has two commonly used meanings:

They wanted to buy Honza a birthday present so they all chipped in fifty crowns each and got him a nice bottle of rum.
(They all contributed fifty crowns)

Everyone had something interesting to say except Roman who just chipped in with stupid comments.
(To say something/To contribute to a discussion)
There’s still a lot that can be said about the word ‘chip’ but it’ll have to wait. Let me leave you with just a few more types. Of course, there are microchips and microwave chips which are very different things. And there are all sorts of chips in sport. And then there are buffalo chips. Do you fancy some? They burn very well apparently, but I don’t think they taste too good.

Thanks to Callum for another great article

You can chip the ball in football. Or chip the goalie!