Housing in the UK (with audio) 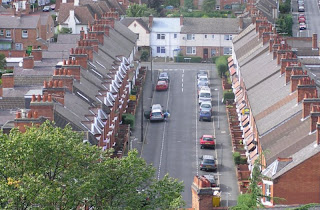 The United Kingdom has the third highest population density in Europe after the Netherlands and Belgium, and England alone is higher than all three. Housing tends to be smaller and more closely packed than in other countries, particularly compared to North America.

Ever since the Great Fire of London, the British have had a particular love of the terraced house: a house that is one of a row of identical houses situated side by side and sharing common walls (see photo). The majority of surviving housing built before 1914 is of this type, and therefore is very common in inner residential areas. In the twentieth century the process of suburbanisation led to a spread of semi-detached and detached housing (houses sharing just one or no common walls). After the second world war, public housing was hugely expanded to create a large number of council estates, although the majority of these have since been purchased by their tenants. Although many British people live in flats, it is commonly argued that they are less comfortable with this form of living than their European neighbours. This is not the case in Scotland, where many more people live in this type of housing.