"wiki" (n)
Wiki is one of those words that I knew existed (mainly from the website Wikipedia) but I never really thought about what it was or meant....until now. It has just officially entered the Oxford English Dictionary this March and so I decided to learn a bit more about the word.

A wiki is a website that allows users to add and update content on the site using their own Web browser. This is made possible by Wiki software that runs on the Web server. Wikis end up being created mainly by a collaborative effort of the site visitors.

Where does the term Wiki come from? 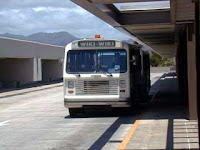 The word was coined by Ward Cunnigham in 1995. He heard this word on his first visit to Hawaii. An airport worker directed him to take the Wiki Wiki bus between terminals. In Hawaiian 'wiki wiki' meant quick and words are doubled for emphasis. This word from the Hawaiian language stuck in Cunningham's mind and he chose to call the technology that he was working on WikiWikiWeb. He installed the WikiWikiWeb on his company Cunningham & Cunningham's website c2.com on March 25 1995 . He chose to use the word in lower case as the progam name, thus it was the first ever wiki. The url for the technology can be found on the wiki page. From this page you can navigate via other links and find some useful and interesting information about wikis.
Posted by Matt Ford at 22:57