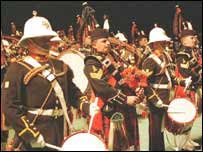 The original Edinburgh International Festival started in 1947, and offers visitors a rich programme of classical music, theatre, opera and dance. The same year that the official festival began, a handful of theatrical companies gatecrashed the festival and organised their own event, which grew into what is now called the Fringe Festival.

The term 'fringe' means something on the outside of the main event, but over the years, the Edinburgh Fringe Festival has become the largest of all the festivals, and indeed the largest arts festival in the world! The Fringe features performers and acts which are less traditional and more unconventional than those in the International Festival, and includes a lot of stand-up comedy shows, music and children's entertainment. The Edinburgh Fringe is seen as an important place for up-and-coming stand-up comedians to perform at.

At the same time in Edinburgh there are various other festivals, such as the Jazz and Blues festival, the Book Festival, the Film Festival, and even an Internet Festival! There is also a multicultural festival called Mela, which celebrates the diversity of people living in Edinburgh, in particular people with South Asian origins.

Edinburgh Castle is the site of one of the most spectacular events - The Military Tattoo. A military tattoo has nothing to do with a tattoo on your skin! It means a performance of military music, for example, by marching bands. In Scotland the military tattoo traditionally includes bagpipes and drums. This year the display will also feature dancers, horses and motorbikes!

Though you have to pay to attend most of the events at the various festivals, there are several groups who organise large numbers of free events as well.

festivals
a festival is an organized set of special events, such as musical performances

a handful of
a small number of, not many

traditional
well-established (e.g. practice or custom) within a social group

multicultural
including people who have many different ways of life, traditions, customs and beliefs

diversity
here, when people of different backgrounds live in one place, variety

military
connected with the armed forces

tattoo
a permanent image, pattern or word on the skin which is created by using needles to put colours under the skin

bagpipes
a type of musical instrument, played especially in Scotland and Ireland, from which you produce sound by blowing air into a leather bag and forcing it out through pipes